The 30 Best Car Free Cities in the US 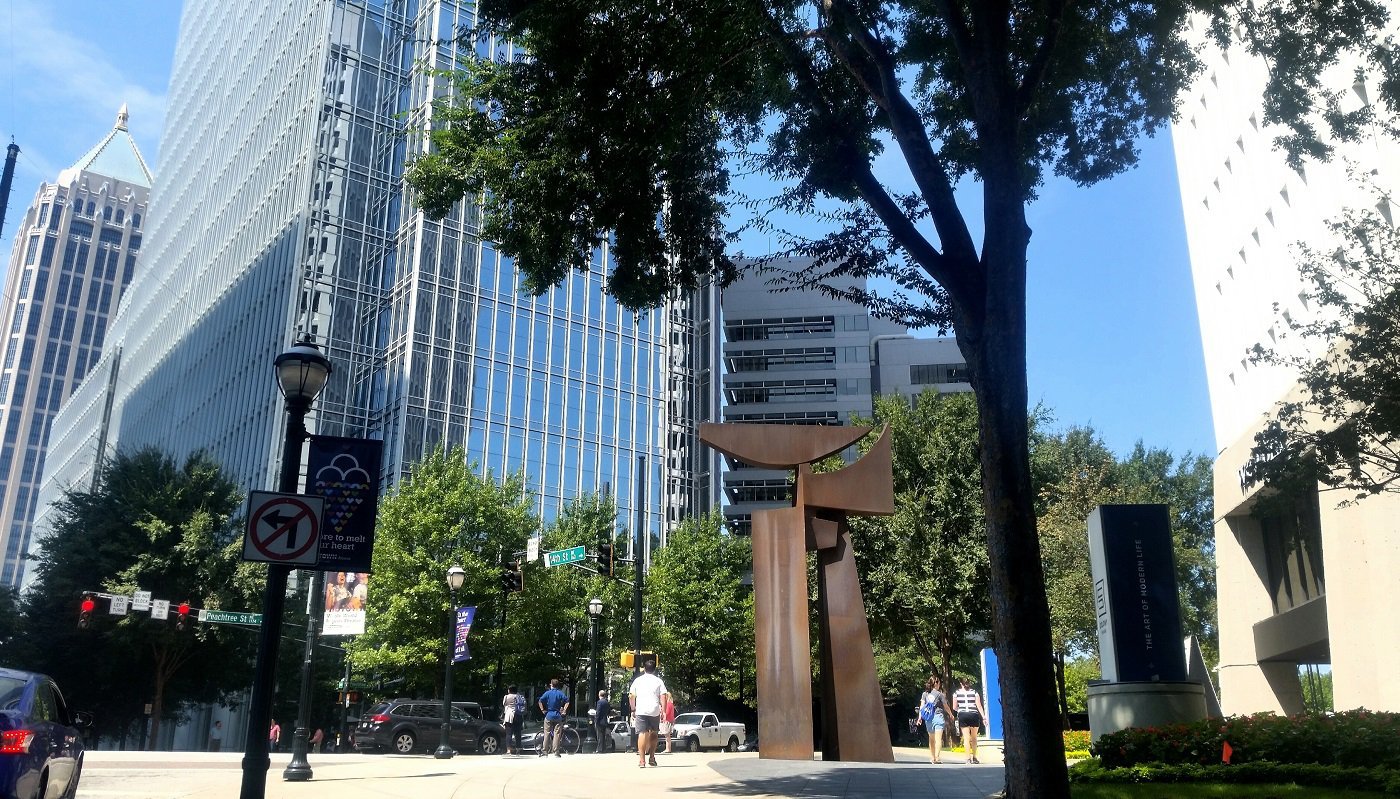 Some of the most thriving cities across the country have kept their commuters in mind as they grow and expand the city. Focusing less on the building of highways and channeling those funds and resources into a more eco friendly form of commute. Two wheels trump four now, who would’ve thought. From the inner city to the suburbs, a carless lifestyle is now sought after. Some of the most major cities, up-and-coming, as well as mid west cities have made strides in accommodating this desire. Let’s take a take a look at the top car free cities around the US.

In most neighborhoods in Folsom there are shaded sidewalks and bike lanes, making for a good walk or bike ride when stepping out of the house. In addition, the expanding light rails add to the “no need for a car” lifestyle.

From the city to the suburbs Atlanta has car free options and areas. The Beltline is actually perfect example of this in the city; where motored vehicles are actually illegal. The parks and trails make for some great scenery on a nice walk in the fall or bike ride in the spring.

Portland has a ton of bike commuters throughout the city; in addition to the designated bike lanes on the city streets, the max (public transportation) makes the reach of these car free commuters expand into the suburbs and surrounding cities. Making Portland one of the top car free cities on the list.

We all know NY has always been a huge advocate for public transportation, but is actually living a car free life feasible? Between the old as time NYC subway and the new initiative the “Open street program” more and more streets are being closed off to vehicle travel. granted, it may be temporary but all it takes is for a trend to catch for it to become permanent.

In Tempe, they are developing whole neighborhoods and communities that are build around being a car free city and community. Places like Culdesac Tempe which was built from scratch with the exact idea in mind to be a car free city; one of the first in the US.

Granted living car free in Minneapolis is much easier in the summer months than in the winter, but manageable year round. Minneapolitans have become more conscious of the increasing desire to live without a car. Strides have already been made in a number of city blocks to add bike lanes, widened sidewalks, and reduced parking for cars. Certainly an up-and-coming car free city to keep an eye on.

The top two factors to be considered throughout this entire list are college towns and coastal cities, which Boston of course is both. Boston has (once again) brought back it’s car-free days within the city, 7 city blocks along the back Bay are completely closed off to vehicles and only pedestrian walkways.

Seattle (in addition to Portland); the entire Pacific Northwest as a whole have made tremendous strides is accommodating the car free choice of life style by vast majority. During the pandemic Seattle closed 20 miles of streets for the access of exercise and walking to grocery stores. Seattle officials have decided to make the closure permanent.

Jersey City (similar to Tempe) are making ground breaking stride in achieving the status of a car free city. Jersey City is working on the first in state ride share program called “Via” offering ride share by way of electric vehicles as well as them being handicap friendly. Like Boston, another example of a coastal city making the car free life a top priority.

One of the first surprises on the list is in fact Boise Idaho, which has been dedicating the construction of tree-lined pathways and bike lanes since the mid 1970’s. Downtown Boise has maps throughout the city showing current dedicated bike paths, streets with bike lanes, and multi-use paths and walking areas.

Oakland (in addition to another few California cities) has done and is doing their part to promote itself as a contender as on of the biggest car free cities in the states. Oakland, with its heavy latin influence, has adopted an event called Oaklavia after a Columbian event called Ciclovia. The event is a car free every person for themselves social gathering with an emphasis on physical activity.

District of Columbia brings a familiar concept like NYC and Boston in the sense of it being a “coastal city” but also has different dynamics to consider like the socioeconomics of the inner city. The ward level within the city has a very high car free community not only by choice as cities past, but by circumstances due to the low median income. Regardless of the circumstances; DC in quickly gaining traction as one of the car free cities in the US.

Chicago as on of the car free cities is a concept many in the city are working and fighting towards. Less of a bike advocate city and more of a pinnacle on public transportation, Chicago is certainly making strides in the right direction. A civic group called “Active Transportation Alliance” is working on having select streets in the city as designated car free streets.

Philly has had a BOOM in the expansion of the bike life (not to be confused with motorbikes). The have a local program called the Indigo bike-rental system. Conceptually, its very similar to ride share scooters (bird, lime, etc) in the sense you can rent a bike at one location and return it to another after use. Sounds like a great way to promote bike riding over car driving.

An East coast college town! As we’ve figured out college towns make it easy to live car free as well as it being a coastal city right off the North Atlantic. In particular Federal Hill makes for one of the best car free cities on the east coast. Also busses and trollies make commuting around easy and convenient although there isn’t as much food and shopping as other cities.

Denver has done one of the better jobs amongst the car free cities in this list in regards of the construction of entire neighborhoods to make not having a car inconsequential. A majority of which would be the neighborhoods and communities centrally located, making the access to the popular nightlife easily accessible by numerous ways; a car not being one.

This one may be a surprise to some given the automotive undertone (Indy 500) of the city itself. Granted, the car free accommodations only pertain to inside city limits but within said city limits there are plenty of bus options, ride share, and of course the good old biking ways. if you enjoy observing the cars but not so much indulging; Indy is the way to go.

Miami is the southern version of east coast coastal cities (like the D.M.V); Over the past few years Miami has the residential boom has created a pedestrian centers. Connecting them through metrorail, Metromover, Metrobus, and Trolleys.

Viva Las Vegas! If you have ever been to Vegas then you know; the vast majority of anything you want to do is on the strip or in downtown Las Vegas (old Las Vegas). Vegas has one of the higher “walkability”scores amongst US car free cities. Biking is an option, renting scooters, taxis, ride share, and of course what everyone must do in visiting the strip, walking.

Despite the unpredictable weather, New Orleans is trending in the right direction in improve its efforts in becoming a car free city. With ample bike lanes and a relatively flat terrain makes biking (given a reasonable proximity) a viable option.

Thats right, since the mid 90’s Salt Lake has amped up the public transportation presence within and outside the city. Their TRAX line opened in 1999 and spanned about 17 miles. Now, the have a 50 station rail system spanning over 88 city miles. https://www.movoto.com/guide/salt-lake-city-ut/where-to-live-in-salt-lake-city-without-a-car/

In contrast to flat planed areas (like New Orleans mentioned above) Hawaii has lots of hills and valleys. But, Hawaii has a one of the top rated public transportation they call TheBus. Other island like Waikiki have close walking proximities from the “city life” and Ala Moana (the largest outdoor shopping mall in the world) to the beach.

Baltimore has a similar dynamic as the other eastern coastal cities but a different approach. The MTA (Maryland Transit Administration), subway, or the unique to the city Charm City Circulator. There are also shuttles that may be a viable option for the ones in the area of John Hopkins or the Homewood JHMI vicinities.

Another mid-west surprise with this one, the average person certainly doesn't think of Nebraska being one of the car free cities. Well, like most downtowns there are strides being made to make it more car free friendly to those who choose that lifestyle. Mostly midtown and downtown but plenty of areas in and around the city are trying to improve the cities walkability score. From adding more frequent bus routes, nicer crosswalks, and influx in bike racks as well.

Regardless if country music is your thing or not, we’re here to discuss the car free cities in the US and Nashville has an array of neighborhoods that fit the bill. From architectural variety in Hillsboro Village, the free spirits of 5 Points in east Nashville, down to 12 south obviously on the south side of the city. All collectively and individually create the ideal nesting sports for single or families looking to live in on of the most musically influential car free cities in the states.

Unlike any other city with the exception of the ones that have “car free days” or car free festivals, Norfolk dedicated a week (6 days) to an initiative by the city councils Pushing Ahead program. Backed by a local bike share provider Beryl, they offer free rides to residents on bike share and bike rentals.

Tampa is surprisingly easy to access the vast majority of the city and surrounding areas living car free. You might need a car (or a ride share service) to reach attractions further out but for the riverwalk, museums, and aquarium you’ll be just fine living car free.

An impeccable public transportation system and the mild season makes Durham one of the more feasible car free cities. the new Bull City Connector and the seasoned, tried, and proven reliable GoDurham make for navigating the city and neighboring college towns effortless.